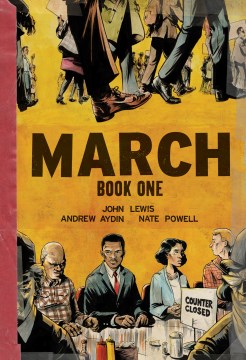 This graphic novel is a first-hand account of Congressman John Lewis' lifelong struggle for civil and human rights, meditating in the modern age on the distance traveled since the days of Jim Crow and segregation. Rooted in Lewis' personal story, it also reflects on the highs and lows of the broader civil rights movement. Book one spans Lewis' youth in rural Alabama, his life-changing meeting with Martin Luther King, Jr., the birth of the Nashville Student Movement, and their battle to tear down segregation through nonviolent lunch counter sit-ins, building to a stunning climax on the steps of City Hall. HIs commitment to justice and nonviolence has taken him from an Alabama sharecropper's farm to the halls of Congress, from a segregated schoolroom to the 1963 March on Washington D.C., and from receiving beatings from state troopers, to receiving the Medal of Freedom awarded to him by Barack Obama, the first African-American president -- From cover flaps.
Publisher: Marietta, GA : Top Shelf Productions, [2013]
Copyright Date: ©2013
ISBN: 9781603093002
1603093001
9781480625006
1480625000
9781603093835
1603093834
9781484402597
1484402596
9780606324366
0606324364

The graphic novel story of Georgia congressman John Lewis's youth through his involvement with Martin Luther King Jr. and the Civil Rights movement. Followed by books two and three.

While he waits to step outside the Capital for the inauguration of Barack Obama, Congressman John Lewis reflects on his early years fighting for Civil Rights.

(Teen) A striking retelling of his lifelong struggle for human and civil rights. Wonderful artwork and evocative storytelling bring his story to life for a new generation of readers and activists. ~Liz

Fantastic! March (Books 1-3) tell the story of John Lewis and his experience in the Civil Rights movement. They show the courage and sacrifice of Lewis and countless others who stood up for basic human rights and how they maintained dignity and respect in the face of adversity. This is an incredi... Read More »

The incredible graphic novel trilogy that starts with this book tells the story of the United States civil rights movement from the perspective of one of its key figures, John Lewis. A compelling account of this pivotal moment in history told adeptly through detailed, inventive, and beautiful bla... Read More »

A great combination of story and art. A moving version of Congressman Lewis's story and a potent reminder of this historic struggle.

Really starting to enjoy graphic novels - they are not just comic books for kids any more! Great story of a bunch of brave people in a troubling era.

A very well-done graphic novel. I enjoyed the artwork as well as the text which covered Lewis' upbringing & his rise in the nonviolence movement.

As we approach MLK Day 2021, I'm returning to review an enduring favorite: this graphic novel memoir written by Representative John Lewis in three parts. All are amazing. This is the first in the series. They are set against the backdrop of President Obama's first inauguration through Rep. Lewis' eyes and then flashes back to his experiences during the Civil Rights Movement. Want a primer on readable primer on the events of the Civil Rights Movement? This is your book series!

The details about personal lives and organizing strategy make this both gripping and worthy of in-depth study. The civil rights movement is often simplified and declawed, in a way that makes it seem dreamy, passive, and inapplicable to contemporary politics. This shows otherwise, with specifics of tactical strengths and weaknesses that resonate in the age of Black Lives Matter.

In the first installation of the graphic novel trilogy, John Lewis, the former US Congressional District Representative for Georgia, gives an inspiring and boarder look at the Civil Rights Movement through his personal account. In these true events, Lewis describes the notable role he and other activists presented in ending legal racial discrimination. In addition to Lewis’s organized sit-ins and marches for civil rights, an essential part of US History is expanded on with mentions of hidden key figures alongside revolutionary fighters, like Martin Luther King Jr. and Rosa Parks. March: Book 1 serves as a remembrance of the injustice a segregated America went through to create the diverse country we live in today.

I liked how the book, filled with appalling but genuine records, gives a deeper understanding of the Civil Rights Movement. March: Book 1 was inspiring yet painful to read, knowing that the accounts given were all real. I was able to feel the anger induced inside segregation, and I was able to learn many things that our history books briefly touch upon. This book gave me an unobstructed view on the times of a segregated and Jim Crow. I admired the courage and challenges people playing in contributing to the larger movement of ending legal racial discrimination. This book shows the transparency of the harsh realities of that time and includes such heavy and prominent actions of nonviolence that I believe is very important for everyone to read upon. There are millions of discussion to be done about this segregation and civil rights in every household, and reading this book is the first step.

I recommend everyone to read this book. March: Book 1 serves as a reminder of what has been done on American soil, and inspires a future leader in the reader to fight for change.

Learn about the life of a great American by reading this award-winning trilogy - an autobiography in graphic novel form of the late John Lewis. He chose to use the same genre that helped him learn about his own hero, Dr. Martin Luther King, Jr. Or re-read it in his honor.

March: Book One is the first book in a three part autobiography graphic novel series about the early life of Congressman John Lewis and the beginnings of the fight for Civil Rights.

This is a good book for readers who like to learn about history, but maybe don't enjoy reading it as much. I myself love watching History Channel and learning about History, but sometimes find it hard to read texted books about it.

I'm usually not a fan of comics that are just black inked art but Nate Powell does a good job at the artwork. The narrative also kept me intrigued and wanting to learn and read more.

Presenting the story in graphic novel format is a powerful way to help it reach young readers to inform and inspire. The writing is engaging and accessible, accompanied by realistic black-and-white illustrations which convey dramatic action and emotion, creating a rich historical record. Recommended for teens and adults.

LoganEva thinks this title is suitable for 12 years and over

orange_spider_124 thinks this title is suitable for 10 years and under

March opens on the Edmund Pettus Bridge, as the march from Selma is about to be confronted by troopers armed for a riot, then flashes forward to Inauguration Day 2009, when Barack Obama is about to be sworn in as the first African American president of the United States. The frame narrative takes place in Congressman Lewis’ Washington D.C. office when a black woman from Atlanta arrives with her two sons to see the office of their representative. The congressman begins to tell the boys about his early life, and the beginnings of the civil rights movement, and continues through the desegregation of Nashville’s lunch counters in 1960.

Coarse Language: Many uses of n****r

The thing is, when I was young, there wasn’t much of a civil rights movement. I wanted to work at something, but growing up in rural Alabama, my parents knew it could be dangerous to make any waves.