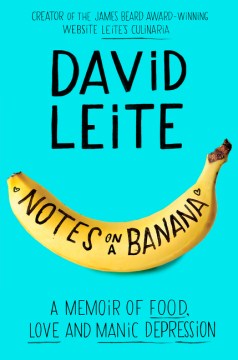 Notes on A Banana

A Memoir of Food, Love, and Manic Depression

A FINALIST FOR THE NEW ENGLAND BOOK AWARD FOR NON FICTION

A PASTE BEST BOOK OF THE YEAR

Born into a devoutly Catholic, food-crazed family of Azorean immigrants in 1960s Fall River, Massachusetts, David Leite had a childhood that was the stuff of sitcoms. But what noone knew was that this smart-ass, determined dreamer with a vivid imagination also struggled with the frightening mood swings of bipolar disorder. To cope, “Banana,” as his mother endearingly called him, found relief and comfort in food, watching reruns of Julia Child, and, later as an adult, cooking for others. It was only in his mid-thirties, after years of desperately searching, that he finally uncovered the truth about himself, recieved propoer medical treatment, and began healing.

Throughout the narrative, David takes the reader along on the exhilarating highs and shattering lows of his life, with his trademark wit and humor: We watch as he slams the door on his Portuguese heritage in favor of blond-haired, blue-eyed WASPdom; pursues stardom with a near-pathological relentlessness; realizes he’s gay and attempts to “turn straight” through Aesthetic Realism, a cult in downtown Manhattan; battles against dark and bitter moods; delights in his twenty-plus year relationship with Alan (known to millions of David's readers as “The One”); and shares the people, dishes, and events that shaped him.

A blend of Kay Redfield Jamison’s An Unquiet Mind, the food memoirs by Ruth Reichl, Anthony Bourdain, and Gabrielle Hamilton, and the hilarious storytelling of Augusten Burroughs, David Sedaris, and Jenny Lawson, Notes on a Banana is a feast that dazzles, delights, and, ultimately, heals.

Baker
& Taylor
The founder of the website Leites Culinaria presents a memoir of growing up in a devoutly Catholic, blue-collar Portuguese-American family, his struggles with manic depression and his sexual identity, and his love for food and cooking that helped him cope with his mood swings.

very interesting story of a refugee. shows his point of view as a child, but it adds a very interesting twist during his teenage years and early adulthood. it was in a different time when dating wasn't as it is now. LGBTQ members weren't as accepted as they are now. it definitely shows that we have moved forward and things have changed positively.

There are no quotes for this title yet.