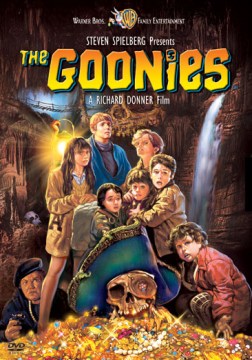 A band of misfit kids searches for buried treasure in a subterranean cavern. Here they cross the path of Mama Fratelli and her outlaw brood. The kids befriend Fratelli's hideously deformed (but soft-hearted) son, who comes to their rescue.
Publisher: Burbank, CA : Warner Home Video, [2001]
ISBN: 9780790749808
0790749807

A cult classic filmed in Oregon, the Goonies are group of young misfits who set out on an adventure to find a long-lost treasure!

I'm not really much for action movies but I loved this one. Hilarious moments and a great cast. Loved the scenes that where shot in Oregon (Astoria and Cannon Beach) and the special effects are amazing.

🏴‍☠️ A terrific roller-coaster ride with some likable, adventurous kids. The overlapping and sometimes indistinct dialogue is very much like the way real kids talk, in case you've forgotten. If the happenings don't seem slice-of-life realistic, try to think of it as a fantasy. Fun for all, a real family movie.

Love it! If you liked this then i recommend you watch THE SANDLOT. I don't recommend THE SANDLOT 2 though. Not a fan.

Great 80's classic! Must watch before losing sense of adventure and sense of humor from growing up.

Mr. Spielberg is involved in good movies ( most of the times ) but this one is rather not. A group of screaming kids , the one eating continuously , the bandits not even bandits........ we do not recommend it, Less than one star,.
daniel.

Escapist film with average plot & over the top special effects didn't age well at all. Huge wince on stereotypes. Too much flash & too little soul. Even as a teenager I thought it was too cheesy & criminals are not that dumb.

One of my favorite movies as a kid! So great!!

If you want your kids to imagine life in the 1980s, this is your film: Cyndi Lauper music and big glasses and hair. Watching the Rube Goldberg-style inventions and the kids' treasure hunt which turns into an Indiana Jones type of adventure. Now I realize the traps in Indiana Jones were very Rube Goldberg!

red_badger_814 thinks this title is suitable for All Ages

Drawaway16 thinks this title is suitable for 13 years and over

boutiquechic thinks this title is suitable for 8 years and over

librarylin19 thinks this title is suitable for 7 years and over

DanniOcean thinks this title is suitable for All Ages

The Goonies, a group of friends living in the "Goon Docks" neighborhood of Astoria, Oregon, face foreclosure on their families' homes from the expanding Astoria Country Club. On one of their last days their morale sinks particularly low due to Mikey's older brother having failed his driver's license exam, thwarting their plans to "cruise the coast in style" during their "last Goonies weekend." While rummaging through the Walshes' attic, they find an old newspaper clipping, a Spanish map, and an artifact relating to a rumor of a lost but not forgotten pirate treasure somewhere in the area. Hearing the call of adventure, Mikey tries to persuade his friends to join him in search for the treasure hoarded by a pirate named One-Eyed Willie. Initially reluctant, the group eventually decides to evade the authority of Mikey's older brother, Brandon, and escape for one last "Goonie adventure." (Excerpt from the Goonies Wikipedia page)