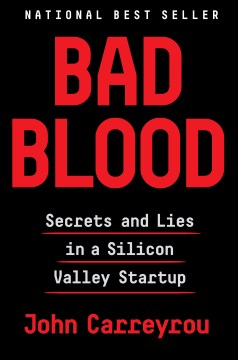 Secrets and Lies in A Silicon Valley Startup

"The full inside story of the breathtaking rise and shocking collapse of a multibillion-dollar startup, by the prize-winning journalist who first broke the story and pursued it to the end in the face of pressure and threats from the CEO and her lawyers. In 2014, Theranos founder and CEO Elizabeth Holmes was widely seen as the female Steve Jobs: a brilliant Stanford dropout whose startup "unicorn" promised to revolutionize the medical industry with a machine that would make blood tests significantly faster and easier. Backed by investors such as Larry Ellison and Tim Draper, Theranos sold shares in a fundraising round that valued the company at $9 billion, putting Holmes's worth at an estimated $4.7 billion. There was just one problem: The technology didn't work. For years, Holmes had been misleading investors, FDA officials, and her own employees. When Carreyrou, working at The Wall Street Journal, got a tip from a former Theranos employee and started asking questions, both Carreyrou and the Journal were threatened with lawsuits. Undaunted, the newspaper ran the first of dozens of Theranos articles in late 2015. By early 2017, the company's value was zero and Holmes faced potential legal action from the government and her investors. Here is the riveting story of the biggest corporate fraud since Enron, a disturbing cautionary tale set amid the bold promises and gold-rush frenzy of Silicon Valley"-- Provided by publisher.
Publisher: New York : Alfred A. Knopf, 2018.
Edition: First edition.
Copyright Date: ©2018
ISBN: 9781524731656
152473165X

This is a fascinating non-fiction story of the rise and fall of Theranos, a biotech start-up in Silicon Valley, complete with hubris, greed and audacity.

The riveting story of the hubristic rise of blood testing startup Theranos – and its inevitable crumbling. Sarah

"A false positive might cause a patient to have an unnecessary medical procedure. But a false negative was worse: a patient with a serious condition that went undiagnosed could die."

I definitely don't think Elizabeth Holmes set out to commit fraud, but when she was told her technology was flawed, why didn't she listen?? Especially once she knew she was putting patient's lives at stake! She was a 19-year-old college dropout who knew absolutely nothing about blood science!! I still don't understand how she could care about no one, except herself. Such a narcissist.

It's a bit of a dark book. I found myself so angry and frustrated by what I was reading. Thank goodness for the comic relief provided by Elizabeth's wacko boyfriend, who was helping her run Theranos. Sunny had a habit of repeating technical terms others were using. At one meeting the engineers were discussing "end effector" but Sunny thought they had said "endofactor." At the next meeting, the engineers had a power-point presentation called "Endofactors Update." Sunny just nodded his head in approval. I needed that chuckle!

I will be following the trial in August and hoping they (forgive the pun) throw the book at her!

Four words: Commit to the bit.

Bill Gates’ favorite book of 2018. A true-life thriller with a tragic ending, of a startup whose product didn’t work.

In this compelling work of investigative journalism, we learn the details of story that proves truth can be stranger than fiction. Readers follow the tale of Elizabeth Holmes, founder of a blood analysis company Theranos in 2003. She used her drive and charisma to pitch a new technology and received a small fortune in funding from the elite of Silicon Valley community. Everything seems to be going great except for one small detail—the technology does not work. Rather than admit her failure and abandon her goals, Holmes goes down a slippery slope of deception and paranoia to keep the company going. This glimpse behind the scenes of a doomed startup allows readers to see the impact of one journalist’s hunch that brought down a company.

Great book 5 stars . A courageous journalist.
I missed the Eliz. Holmes story originally -no TV, so it was all new to me.

Amazing to see how certain companies operate- high-powered Board, Kissinger, Mathis, and vicious legal tactics by Boies firm, trying to intimidate and scare whistle-blowers with expensive lawsuits that could crush them .

Another scary thought is most of the mainstream media were like pack-journalists, creating an image of a person, Elizabeth Holmes and her company , that was false and fake-news.

The refusal by the magazine's owner to kill the story , even though he was a major investor in Holmes' company was impressive to me.

When she was just 19 years old, Elizabeth Holmes dropped out of Stanford university and leveraged her family's "old money" connections to start Theranos, a Silicon Valley company that could revolutionize the blood diagnostic industry. Within a decade, her Silicon Valley startup employed over 800 people and was valued at over nine billion dollars. She forged bold partnerships with the US military and with popular drug store Walgreens; many Americans had their blood tested by Elizabeth Holmes' company. The huge problem was that none of her revolutionary blood testing technology actually worked. Written by an experienced investigative journalist, this amazing book goes behind the scenes with former Theranos employees and gives us the inside scoop. From my own work experience, I recognized many of the archetypal characters in the Theranos story, but was still completely amazed to see this tragic story unfold.

This book does read like a medical thriller, and as dramatic as the works of Richard Preston. Bad Blood also highlights the real world damage done by over-zealous law firms, especially David Boies, (Boies, Schiller & Flexner) who's brute intimidation tactics have been seen repeatedly and are laid bare in this story. Boies et al, financially destroyed many lives, and clearly drove Ian Gibbons to suicide. Having seen this kind of legal behavior personally, I am grateful to see this abusive behavior documented by John Carreyrou.

The over-arching question that the reader will struggle with is "How did this go so far"? While some of it was luck, and some Holme's apparent incredible persuasive abilities, I am left with the conclusion that because she was a young woman, seen as a budding genius, investers were unable to ask tough questions, or perform the deep diligence that typically happens in most startup investments. Pile on top that the story line for Theranos was every investors "dream" investment, one that positively changes the world for the better, and it becomes apparent how so many otherwise worldly people self-deluded themselves to the end.

Elizabeth Holmes is Bernie Maddoff. When we wonder how Maddoff got away with it for so long, here is another example. Wanting it to be true, investors could not set their emotions aside, and gullibly swallowed what they heard, discounting contrary evidence. There are many such unrealistic dream-driven companies that VC firms invest in. The difference here, as pointed out by the author, are peoples lives were at stake. Boies, in particular, should have his law license reviewed for intimidating whistleblowers trying to expose the medical dangers this company posed to its "customers".

A rare gem of objective, honest reporting. An amazing account of corruption in the Silicon Valley. Hope to see more of the same from John Carreyrou.

Elizabeth had hung inspirational quotes in little frames around the old Facebook building. One of them was from Michael Jordan: “I’ve missed more than 9,000 shots in my career. I’ve lost almost 300 games. 26 times, I’ve been trusted to take the game winning shot and missed. I’ve failed over and over and over again in my life. And that is why I succeed.”

Another was from Theodore Roosevelt: “Far and away the best prize that life has to offer is the chance to work hard at work worth doing.” Patrick suggested they make them a more integral part of the workplace by painting them in black on the building’s white walls. Elizabeth liked the idea.

She also loved a new quote he suggested. It was from Yoda in Star Wars: “Do or do not. There is no try.”

The media mogul sold his stock back to Theranos for one dollar so he could claim a big tax write-off on his other earnings. With a fortune estimated at $12 billion, Murdoch could afford to lose more than $100 million on a bad investment.
===
“VAPORWARE” was coined in the early 1980s to describe new computer software or hardware that was announced with great fanfare only to take years to materialize, if it did at all. It was a reflection of the computer industry’s tendency to play it fast and loose when it came to marketing. Microsoft, Apple, and Oracle were all accused of engaging in the practice at one point or another. Such overpromising became a defining feature of Silicon Valley. The harm done to consumers was minor, measured in frustration and deflated expectations. By positioning Theranos as a tech company in the heart of the Valley, Holmes channeled this fake-it-until-you-make-it culture, and she went to extreme lengths to hide the fakery.

It isn’t clear exactly when Elizabeth (Elizabeth Anne Holmes born 1984) and Sunny (Ramesh “Sunny” Balwani born 1966) became romantically involved, but it appears to have been not long after she dropped out of Stanford. When they’d first met in China in the summer of 2002, Sunny was married to a Japanese artist named Keiko Fujimoto and living in San Francisco. By October 2004, he was listed as “a single man” on the deed to a condominium he purchased on Channing Avenue in Palo Alto. Other public records show Elizabeth moved into that apartment in July 2005.
===
FoMO—the fear of missing out.

March 14, 2018, the Securities and Exchange Commission charged Theranos, Holmes, and Balwani with conducting “an elaborate, years-long fraud.” To resolve the agency’s civil charges, Holmes was forced to relinquish her voting control over the company, give back a big chunk of her stock, and pay a $500,000 penalty. She also agreed to be barred from being an officer or director in a public company for ten years. Unable to reach a settlement with Balwani, the SEC sued him in federal court in California. In the meantime, the criminal investigation continued to gather steam. As of this writing, criminal indictments of both Holmes and Balwani on charges of lying to investors and federal officials seem a distinct possibility.

High-profile investors who lost the most money on Theranos per WSJ (in $Millions):