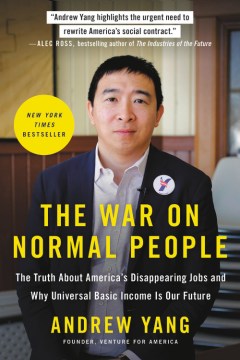 The War on Normal People

From entrepreneur Andrew Yang, the founder of Venture for America, an eye-opening look at how new technologies are erasing millions of jobs before our eyes-and a rallying cry for the urgent steps America must take, including Universal Basic Income, to stabilize our economy. The shift toward automation is about to create a tsunami of unemployment. Not in the distant future—now. One recent estimate predicts 13 million American workers will lose their jobs within the next seven years-jobs that won't be replaced. In a future marked by restlessness and chronic unemployment, what will happen to American society? In The War on Normal People , Andrew Yang paints a dire portrait of the American economy. Rapidly advancing technologies like artificial intelligence, robotics and automation software are making millions of Americans' livelihoods irrelevant. The consequences are these trends are already being felt across our communities in the form of political unrest, drug use, and other social ills. The future looks dire-but is it unavoidable? In The War on Normal People , Yang imagines a different future — one in which having a job is distinct from the capacity to prosper and seek fulfillment. At this vision's core is Universal Basic Income, the concept of providing all citizens with a guaranteed income-and one that is rapidly gaining popularity among forward-thinking politicians and economists. Yang proposes that UBI is an essential step toward a new, more durable kind of economy, one he calls "human capitalism."
Publisher: [S.I.] : Hachette Books, 2018.
ISBN: 9780316414227
Branch Call Number: Overdrive
Additional Contributors: OverDrive, Inc

Candidate: Andrew Yang is a tech entrepreneur who created the test-preparation company Manhattan Prep and then Venture for America, which tries to incubate start-ups outside New York and the Bay Area. Yang's big idea is a $1,000 per month universal basic income for every American adult.

Yang founded the nonprofit Venture for America with a mission statement to "to revitalize American cities and communities through entrepreneurship". In this book he takes a look at the historic level of income inequality and the depressing prediction that in the near future millions u... Read More »

[UPDATE: Sorry to say, but Andrew Yang dropped out of the presidential primaries - - not unexpected as he was the new kid on the block, after all - - hopefully Bernie will choose him as his VP, although Tulsi would also be acceptable! But . . . Lauren Yang was successful in winning the Miss Chinatown USA title:
http://www.chinesepageantpage.com/ ]

I like Andrew Yang but I couldn't get into this book.

I like Yang’s ideas. He uses data — you know, hard numbers — to back up his claims, and he makes a compelling argument for why a Universal Basic Income is inevitable. He is also a futurist, and he sees things in the long run, and he knows that the working class will only struggle harder to make ends meet as businesses invest in technology that will ultimately replace a lot of America’s workers. If anything, Yang shows us that we are going to need leaders that can see the future to help us to adapt to the fast changes that are coming within the next 10-15 years.

Listen, I don't know if Andrew Yang will be president or not. My gut says no, but I'm currently sitting here in a shirt that says "Vote Yang" on the front. Take that for what you will.

Overall, this book is a combination of Rise of the Robots by Martin Ford and Raising the Floor by Andy Stern. In the acknowledgements of this book, Yang even mentions those two books specifically as inspiration. In general, I would say Yang's book is lesser than those two. He's a fine writer, and I admire his ideas, but the influence of those books is so very obvious as to be distracting at times. Yang's book is neither as chilling a look at automation as Ford's, nor as deep a dive into the logistics of Universal Basic Income as Stern's. In many ways it is a primer on the subjects, written for those who have never before encountered the concepts. But those other books are more definitive volumes on their individual topics than Yang's is on either.

That said, where Yang's book shines is when he has definitive data to work with and crunch. He does a great job of making numbers make sense. I do wish he had spent more time in this book on how he aims to pay for the "Freedom Dividend" (his rebranding of Universal Basic Income), but que sera, sera. He's also remarkably funny despite his doomsaying, which helps to make the book more accessible. In one portion of the book, he is vicious with Ivy League universities and how they make money and manipulate their books, students, the government, and public perceptions of education. Harvard, according to Yang, has become little more than a means to be able to say that a lawyer "used to play cello."

I'm sold on UBI as a concept, however, and feel certain it will need to happen if our economy is to continue functioning without major disruption. I also hope Yang is the person to institute it because I find him a compelling and likable character. But should he not become president, which, as I said early on, I have my doubts about, I hope he will continue fighting for these policies. He has done more for UBI than anyone else and the war on normal people is a war worth fighting.

And if you don't believe there is a war being waged on normal people, or don't believe it is in Arkansas, do a quick Google search on "Arkansas plants closing." Here's a shortlist: Columbia Forest Products, Flexsteel, Kimberly-Clark, Ball Metalpack, Georgia-Pacific, ABB Gearmotor. That accounts for approximately 1,301 Arkansas jobs vanishing in the next two years.

After watching the Democratic debates, I was intrigued by the intelligent and even-toned, matter-of-fact Presidential candidate, Andrew Yang. While others were accusatory, Yang kept throwing out factual data to the audience none of which could be refuted. Why? This book is worth reading – it’s filled with factual and historical data from reputable resources along with a bit of history and why current situations are failing. Don’t be discouraged with the first half of the book because Yang uses all the data and provides ample reasons why his vision of a Universal Basic Income could and has worked (in other countries). Excellent read for those who want to know who he is and why he’s running for U.S. President.

Whoever wrote the publishers weekly review has no idea what they are talking about. UBI would make all of our lives better and help prepare our society for the issues that will arise with massive automation. It is not a utopian concept (MLK JR. and Thomas Paine championed the idea, among others). I would encourage anyone to read this book, google Andrew Yang, and listen to his interview on the Joe Rogan Experience podcast! .

I found Yang's argument for the Universal Basic Income benefit very compelling. The impact of automation on the diminishing employment prospects for millions of Americans seem to be grossly underestimated at the present time. The implications of widespread long-term unemployment and/or underemployment with respect to social and political instability should be seriously considered now.

I am not giving this book a rating because; I have not yet read it. However; while The Publiser Weekly review is well written I have a beef with the part that says "his efforts at offering hope fall short, since ambitious measures like providing a universal basic income for every American stand little chance in an ultrapolarized political enviromment". True enough at present 2019, but politcal evironments have been known to change rapidly. The political evironment could be completely different by 2028 or 2032. The midwest is the heart of the conservative strong hold; yet you may have noticed it is also the part of the country that as been suffering the worst from extreme climate events. As well they are facing mass unemployment and dislocation in the very near future. Today millions of children are growing up facing these new realities. Many of them will be old enough to vote in the 2024 elections even more in the 2028 elections which could easily see green and liberal landslides and an end in the very near future of our present ultrapolarized political environment.
Thus Publishers Weekly's judgemental statement is extremely short sighted.

I do read a lot of "think-pieces" so much of this was just finding out their is a presidential candidate with the same tastes in non-fiction. I did learn that people no longer date in college and 95 million Americans were prescribed painkillers last year.

We have a paralyzed political system in the middle of an Industrial Revolution. Where the questions of what to do with everyone who is displaced. Will need to be decided either with politics or violence.

I hardly ever tell people “You have to read this book”, but that’s what I’m telling you. The War On Normal People is one of the most important and thought provoking books I’ve read in a long time. Automation is quickly changing the employment landscape and leaving many people just scraping by or unable to participate in the job market at all. The author makes it clear that retraining people for new jobs has not proven to be a viable alternative and he also feels that college is not the answer, especially as it has become prohibitively expensive (and there’s still no guarantee that one will get a decent paying job out of it.) One of the solutions that the author proposes is a Universal Basic Income, a government stipend of about $12,000 per year for every American. Sound like welfare? Well, the author makes the case that this stipend would actually eliminate most of the bureaucracy that administers welfare benefits and would make a huge difference in the lives of most Americans. (Did you know that Alaska has been doing something like this since the 1970’s?) He also discusses the changes that need to be made to education (hint: technology isn’t the answer, and going to college shouldn’t be about getting a good paying job afterwards.) There is also a chapter about how health care needs to be changed as well (nothing earth shattering here; health care shouldn’t be about profit.) This book totally sold me on Universal Basic Income, and makes me think about the old saying: “Insanity is doing the same thing over and over and expecting different results.” It’s time to think outside the box. “The revolution will happen either before or after the breakdown of society. We must choose before.”

“Are we not, as the citizens of the United States, the owners of this country?”

“The future without jobs will come to resemble either the cultivated benevolence of Star Trek or the desperate scramble for resources of Mad Max.”

DAVIDZUAPL thinks this title is suitable for 18 years and over