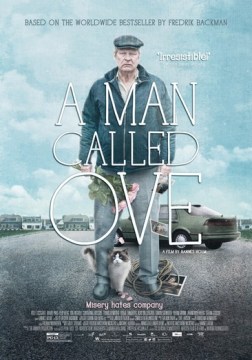 Very interesting script. Had to struggle through the sub titles. Did lots of re-winds

Ove. He's so sad and angry.

The movie was sad but heartwarming, teaching us a lesson on how important devotion is in our lives. The main character Ove was an isolated man, the tragedies that he went through along with his loneliness have induced him to end his life multiple times but it was the companionship of the Parvaneh and her family, the accompany of his loving cat, and the desire to help people that made him feel happiness and something to live for. The movies show us what is the meaning of life, not money, not cars but fetters that connects us to our loved ones and the feeling that make us willing to devote ourselves to them. I totally agree with this message because this is the true way of love. The movie had an emotional ending that left me in tears, I was surprised how this movie uses such a plain setting and background to show not only the source of joys in our lives but a life lesson to love and cherish. I would strongly recommend this film and it is a definite 5/5 star in my heart.
@Mr.WuKong of the Hamilton Public Library's Teen Review Board

I had tried to read the book, but I really couldn't get into it and it's a shame because it had been on my reading list for years. However, I did like seeing it come to life through this movie. It follows the book (what I read of it) pretty well and the actor who played Ove was very good. There are some funny and touching moments in this as well.

I can't believe that the movie is not in English was not mentioned in a few more comments. All subtitles. I would not have rented it if I'd known.

Thankfully the movie did get better as it went along, if you can put up for a bit with the irascible grumpiness and curmudgeonliness ...

I was really excited about reading the book but unfortunately I couldn't get into it at all. So I'm very glad that there is a movie version b/c it is truly wonderful. Great acting, very funny despite some disturbing scenes and I'm guessing it was true to the book. I didn't get very far into the book itself, but the first part was familiar because of what I had read. Loved the ending of this as well. I may go back at some point and try to read the book again now that I know the story.

Ove is an older man living alone, finding problems with anyone and everyone in his neighborhood. As he grapples with memories and the death of his wife, he finds new joy and acceptance in the unlikeliest of places. This film is poignantly beautiful and something we all can relate to! A heart warming film that reaches into the very core human emotion, and bridges the gaps with love and acceptance.

I laughed. I cried. I couldn't stop thinking about this movie for days. If you're looking for a movie that hits all the right notes, I highly recommend A Man Called Ove. There are some powerful life lessons in this movie for those who are open to them. I've been non-stop recommending it to family and friends and I can't wait to get my hands on the book next!

I liked it a lot, but I was a bit upset when some things weren't kept in the movie, like some of the dialogue that was meaningful for me. Besides leaving some details out I really liked it.

If what they say is true, that fate is the sum total of our own stupidity, then I think what altered my fate was a result of the stupidity of my neighbors.
===
Killing oneself isn't all that easy, you know. And now she's moved in as well. So now I've got to get rid of her and then, I'm coming. ... She looked like this when I got her, so don't think it's my fault.
===
One thing is certain, though: whatever we do in this life, no one gets out of it alive.
===
Leave the dog alone.
-That's no dog. It looks more like a hairy winter boot with eyes.
===
Hey! What do you think you're doing?
-It scratched Prince!
If you throw one more stone, I'll transform your pug into a door mat.
-He's a Chihuahua, and that cat's probably contagious.
I'm sure, but then again, I'm sure you are, too. But we don't throw stones at you, do we?
===
People nowadays... It's shocking, really. They're all incompetent these days. They can't reverse a trailer, they can't mend a puncture.

Now I want you to listen to me. You've given birth twice. Three times, soon. You've come all the way from Iran, fleeing war and all kinds of hell. You've learned a new language, got an education and a job - and you've married a loser. So you'll have no problems learning how to drive. I mean, we're not talking brain surgery here.
===
Easy does it, old man.
-"Old man"? I'm not your old man, asshole! I'm "angry man"!
===
Nasanin did a drawing for you. Wait there! Here you go. Nasanin did this drawing for you. The one in color is you. She always does you in color.
===
Hi, Ove! Alright?
-Why does everyone keep asking if things are alright? Why would things not be alright?
===
You mustn't be angry with me, Sonja. Admitting you've been wrong is hard. Especially when you've been wrong for a long time. I'm sorry.

You told me never to give up - didn't you? Now you sit there, feeling sorry for yourself. You've had a hard time. Everyone's an idiot. And you just give up. Because you think you're the only one on this planet who can cope without any help at all. But do you know what, Ove? No one manages completely on their own. No one. Not even you.
===
How the hell can you talk to someone who just hangs up?
-How the hell can you talk to someone who just shouts?
===
The more all these idiots keep babbling about her, the more they will drown out the little memory I have of her voice. There was nothing before Sonja, and there is nothing after her.
-I'm something.
===
You're against cruel animal testing, but you're quite happy with cruel child testing.

Ove... Either we die - or we live.
===
But then, the unfathomable happened. It was like the best thing and the worst thing happening all at once. (After the accident ... on the scenic yet dangerous mountain road in Tenerife, Spain??)
===
He said my heart was too big. It may sound sweet, but it isn't all that good. Sooner or later, you pay. I'd like to have a proper funeral in a proper church. None of this nonsense with ashes scattered in the wind. And I want a quiet funeral, who thought I pulled my weight. The cat has tuna twice a day and wants to shit in private. Please respect that. And above all, make damn sure the bastards don't drive on our paths.
===
You're amazingly bad at dying.
===
What kind of love would that be? To part when you need one another the most?
-But the problem is that 24 hours a day, he has no idea of where he is.
No, but I do.

CORI D. MORRIS thinks this title is suitable for 18 years and over

Mmegood thinks this title is suitable for 16 years and over