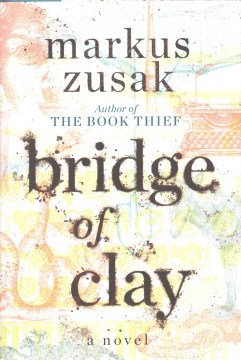 This thoughtful book looks at five brothers who come together and learn to cope and grow after a family tragedy.

Upon their father's return, the five Dunbar boys, who have raised themselves since their mother's death, begin to learn family secrets, including that of fourth brother Clay, who will build a bridge for complex reasons, including his own redemption.

Dream-like. Nothing happens; everything happens. It was hard work to get through it, but satisfying in the end. I expect I will be pondering it for awhile.

Despite the excellent reviews of this book ( I don't know how anyone got through it), I found this an extremely tedious book to read. The writing was so disjointed, the descriptions so off the wall that I gave up and returned it without finishing it.

Five Dunbar boys and a mule named Achilles; how could you resist a setup like that!?! Markus Zusak will not disappoint with this book! Running beneath the story like twigs in an underground stream are the broken heroes and all-too human villains of the Iliad and Odyssey. The first few chapters are a lot like that meandering stream; don’t try too hard to make sense of them. Just go with the flow of Zusak’s beautiful prose as it zig zags between past and present and pretty soon everything will become crystal clear. Trust me, the answers are worth the wait and the tears!

I highly recommend the audio version so that you can hear the author narrate his own novel. While the beginning is rather slow and somewhat confusing, the story quickly picks up its momentum, and the author's ability to bring together past and present as the story unfolds is masterful.

I started this book, expecting to like it. But it is a book written by a man not only about men but, seemingly, for men. The writing is disjointed; the thinking of the character and language used is course and I couldn't even get 1/4 of the way through.

When I want to purchase something it's been my habit to read and give weight to the the WORST reviews of that product. I've slipped into doing that here with books. I fully regret doing that with Bridge of Clay and am enormously grateful I ignored those reviews.

I admit the first one-third of Bridge of Clay is a word salad of disjointed stream of conscious fogginess that seems to have no point. But the 'ah ha' moment comes just a bit later when the everything begins to clear.

Bridge of Clay is a story of 5 boys, their beloved mother and a mule named Achilles. It's a story that's not an easy read but one well worth the patience and effort.

Bridge of Clay will tear your heart out bit by bit and hand it to you in pieces. BUT it will gift it back to you, whole, tearfully and joyously. I can't think of a better recommendation.

"It's funny, I guess, how confessions come out:
We admit to almost everything, and the almost is all that counts."

I will begin this by saying, that while everyone is entitled to their own opinion, yadda, yadda, If you don't like this book, nay, love it, I will fight you. Seriously. After school we'll meet at the bike rack and I will TAKE. YOU. DOWN.

Okay, that might not be true, but I will question your devotion to reading and commitment to understanding less than straightforward text. Bridge of Clay is literature, the kind of literature that will find its way into the classroom within the next few years. I think it was a mistake to label this as a YA novel. It has more in common with Catch-22 than traditional YA. In part, yes, that is because this text is dense, but more importantly because this novel speaks about the things that make us human and tie us to one another well beyond the teen and young adult years. It is the story of five brothers, their parents, friends, loves, and a cat, dog, goldfish, pigeon and mule. Told in Michael's (the oldest brother's) voice, he switches between first person and omniscient narrator (although it becomes clear he has learned much of the story after the fact) and it focuses primarily on the fourth brother, Clay.

Is this novel or epic poem? Everything about this book is lyrical, sometimes literally. Take this:
"To the boy her hair was sunny.
Her Body was warm and slim."
Then there's a three line paragraph, followed by:
"When she played he put his head there.
The stick-thin thighs belonged to him."

Beyond these rhymes, there's internal rhyme in many areas. What I've seen reviewers call "bloated prose" is what the rest of us call poetry. Poetry perfectly balanced with blasphemy and funny moments like when the boys eat their dinner without shirts and Tommy, the youngest son, says "'Hey! Hey, Dad! What are you doing here in just your nipples?'"

There are several themes/metaphors that run throughout the book: the bridge, horse racing, and art. Several characters are obsessed with a fictional book on the life of Michelangelo called "The Quarryman." Through descriptions of the book we learn about David, Michelangelo's crowning achievement in sculpture, housed in a room of a Florentine museum set up to draw attention to its every perfect detail, and a set of four sculptures set in a hallway in the same museum with four statues collectively known as "The Slaves." You can look at these four real statues by Michelangelo online. The four figures are beautiful nude studies, left incomplete (some say on purpose), so that they appear to be trying to break free of the stone in which they're bound. The Atlas already appears to be bearing the weight of the world upon his shoulders. The book is referred to often, but it is only in relation to the characters' lives that we see the struggle given shape.

Michael says,
"'I'd die to find greatness, like the David someday - even just for a moment... But I know - I know...'
Clay answered.
It hit them both hard, but he had to.
'We live the lives of the Slaves.'"

Like Catch-22, Bridge of Clay, uses a scattered timeline, often it seems, to avoid confronting pain, and the Dunbar boys have plenty of pain to deal with. Michael, as the narrator, has to work his way around to the painful things he needs to say. He tells the stories that put it off. He foreshadows and hints. But always there is an air of melancholy to this book from the first word. It is a book built on the pain of living, but as the brother Rory says,"'He needs to hurt nearly enough to kill him,' he said, 'because that how we Goddamn live'"

I read this for the "A Book Featuring Music" part of my 2019 reading challenge. I didn't love it, the plot was jumpy and all over the place, and I found there weren't enough details for the parts I actually wanted to know about. It was almost a 3, but I didn't enjoy it enough.

I almost never give up on a book, however, I made this book the exception. I had very high hopes for this novel because I thought "The Book Thief" was excellent. I read one third of "Bridge of Clay" and did not bond with any characters except the mother and she was already dead!! When you do not care what happens to the people you need to give up, so I did. Cannot recommend. Kristi & Abby Tabby

Markus Zusak has written an epic poem paying homage to the Iliad and the Odyssey through a family dealing with tragedy and loss. The sentences are complex, full of metaphors, and fascinating turns of phrase making this a novel you could read again and again. The five Dunbar boys are their mother, Penelope, are so well crafted I feel like I was part of the family for a while. And what a family it is. Matthew writes this tale on the family typewriter dug up from the backyard of his father's childhood home. Rory, Henry, Tommy, Clay and Matthew raise themselves after their mother passes away and their father leaves. When their father returns with a request to help him build a bridge, the family secrets and history unfurl in bits and pieces. Bridge of Clay is beautiful, touching, and emotional. Power through the confusion you'll feel during the first 100 pages and you will be richly rewarded.

There are no quotes for this title yet.