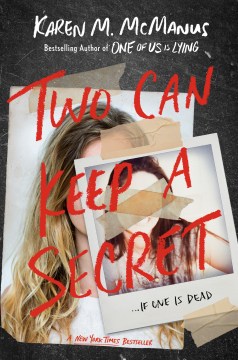 Two Can Keep A Secret

Ellery has heard all about Echo Ridge. Her aunt went missing there at age seventeen; only five years ago, a homecoming queen was killed. Now Ellery is living there, with a grandmother she barely knows. Whens someone declares open season on homecoming, another girl goes missing. It seems everyone in Echo Ridge is hiding something. The thing is, secrets are dangerous-- and most people aren't good at keeping them. -- adapted from jacket
While true-crime afficionado Ellery and her twin brother are staying with their grandmother in a Vermont community known for murder, a new friend goes missing and Ellery may be next.
Publisher: New York : Delacorte Press, [2019]
Edition: First edition.
ISBN: 9781524714727
1524714720
9781524714734
1524714739
9781524714710
1524714712

Chosen by Katie. Echo Ridge is small-town America. Ellery's never been there, but she's heard all about it. Her aunt went missing there at age seventeen. And only five years ago, a homecoming queen put the town on the map when she was killed. Now Ellery has to move there to live with a grandmothe... Read More »

The author of 2017's "One of Us is Lying" is back with a suspenseful thriller featuring complex characters, an intensifying pace, and an intricately-plotted storyline.

List - Don't Read These At Night! -- Spooky Reads for Teens

This suspenseful thriller has an intense pace and compelling style, with complex characters. From the author of "One of Us is Lying."

The book ‘Two Can Keep a Secret’ by Karen M. McManus was an intriguing and eventful book to read. My favourite feature of the book was that the author made each chapter about different characters in the story. Because each chapter was viewed from different perspectives, I was never bored while reading. The book made me feel excited to figure out how the story unravels itself and the slight cliff hangers at the end of each chapter made me eager to read more. I believe that the message of this book was to keep persevering and to never give up no matter how hard it may seem to solve problems, in the end, things will work out. I believe it also shows bravery and strength along with willpower. The characters (especially Ellery) were very well incorporated in the story and sends a good message to audiences. In my opinion, I would recommend this book mainly for teens as the main characters are teenagers themselves and I feel like they could get a better connection to the characters. Overall, I really liked this book, I rate it a 5/5. -@Beavertailreader of the Hamilton Public Library's Teen Review Board

Two Can Keep a Secret Review
5 stars
ages 15-17
Ezra and Ellery move in with their grandmother in a town called Echo Ridge in Pennsylvania, after their mother is admitted into rehab, and are encountered with horror from the night they arrive. The town was known for the disappearance of previous homecoming queens. Ellery, being interested in the field of true crime, took time to learn about the history of the town, and the two girls who had tragically lost their lives. Ezra and Ellery immediately hop into the rhythm of things and get a job at an amusement park centered around the theme of horror. Once school started back up, Ezra and Ellery soon made friends with Malcolm and Mia. Malcolm was the brother of a murder suspect, and had a hard time being confident. As homecoming rolled around, it was time to nominate three girls for homecoming princess, and Katrin, Brooke, and Ellery had been nominated. However, as homecoming approached, the homecoming princesses started to receive threats from a mysterious person, giving the assumption that one of the nominees would be killed. Fear grew and intensified for everyone. Then one day, Brooke disappeared. Ellery was constantly coming up with new theories as to what could’ve happened to the homecoming princess. However, nothing ever seemed to add up. Will Ellery ever be able to find out what happened to Brooke? As the book takes turn after turn, accusing the wrong people, the ending takes you by shock as the killer makes another attempt. I would recommend this book to people who like crime and mystery. The plot keeps you on your toes and makes you impatient to turn the next page. It was a very interesting and intriguing read.

What a rollicking good time this book was! I read and enjoyed One of Us is Lying, but I found it somewhat predictable. This one kept me guessing till the end, and maybe it was just because of the time I read it rather than the content of the book itself, but I enjoyed it a lot more.

Ellery and Ezra move to the small town of Echo Ridge, Vermont, when their mother heads to court-ordered rehab. They're to live with their nana, Nora, a woman they barely know, in a town that's a universe away from the sunny California coast they're used to. And, as it turns out, it's a town with both a missing girls problem and a Halloween theme park that was once aptly named Murderland...welcome to Echo Ridge, Ellery and Ezra. Meanwhile, Malcolm is dealing with the lonely repercussions of being a murder suspect's brother, as well as adjusting to a new stepfather and stepsister. Echo Ridge isn't the friendliest place for him, but he and his best friend Mia befriend Ellery and Ezra, and when new threats arise, they may just uncover secrets of the past at the same time...

I feel like I was one of the few people who didn't absolutely love McManus's debut, so when I finished this one with a satisfied smile on my face, it left me feeling so happy. I found this story to be twisty, fast-paced, and not at all obviously plotted. With these kinds of mysteries, I often find myself questioning everything constantly, and because of that, I usually guess the twists before they happen. In this case, because Ellery has that same kind of spidey-sense always on the go, I found I didn't guess at the perpetrator's identity until it was actually revealed, and I love that I had to go along for the whole ride this time. The couple false "aha!" moments just add to the suspense and the ultimate payoff.

I didn't find these characters to be all that exciting or original, but I also didn't find that to be detrimental to the plot. Especially in Ellery's case, I just liked her enough that it kept me invested, regardless of her relatively basic personality. The writing is tight and easily devourable, and overall, I found the story intriguing and spooky enough to hold my interest all the way through.

I'm not sure if I just couldn't concentrate on this book... or if this book just made zero sense! This book starts off with two twins moving into their mom's small town nicknamed MURDER LAND. Right from the start the way Karen M. McManus describes this small town and its inhabitants I got cheesy 90's horror movie vibes. I thought for sure this book was going to be bloody, with murders happening left and right. Karen M. McManus honestly had the perfect book setting for a really good thriller, but that just wasn't the case with this book. It was honestly incredibly slow paced. Only like one person died in this book and it was super anti-climactic! In this book the main character Ellery's mom also had a twin but was murdered multiple years prior to them moving back. For some random reason Ellery decides that she is going to solve her aunt's cold case and starts out on a mission of finding clues and interrogating people. This murder mystery was highly illogical, this 17 year old girl just happened to piece this incredibly old cold case together! Every time she found another clue it was just TOO EASY! As a reader I was just expected to believe that a group of Detectives couldn't solve this case but miraculously a 17 year old girl who has only been in town for 1 month can solve it... not likely! Anyway every time a character was being interrogated, I found myself having to go back and reread things multiple times because I couldn't remember who this "key witness" even was, just all of sudden they were being questioned. I did not like this book. It just made zero sense, but I'm giving it 2 stars because I just absolutely loved the setting of, "Murder Land." It was an incredibly good setting, but it just didn't go anywhere.

Great book and well written, I was reading it at night and was scared to near panic in someparts-could close my eyes. However, the storyline was a little confusing and the romance bits were in my opinion, unnecessary. The book's main character is too critical and a tryhard. I could love this book if there wasn't teen romance! 8/10

Such a good book. Lots of surprises and twists. Highly recommend!

I enjoyed reading this book, and didn't figure out who the killer was early on!
Kept my interest.

Overall 1 star. I did not like this book. The one thing that I like about it was the fact that it wasn’t obvious who the killer was. Unfortunately, like her previous book, she thought up a great plot but the execution and ending was horrible.

First off, let’s talk about her previous book as well. She thought up a great plot (for BOTH books to) yet she cannot think of a good juicy twist. The killer was so plain and boring (in BOTH books), the motives were boring and dry (in BOTH books), I cannot fathom why she would think of a person so uninvolved in the victim(s) lives or would interest readers (in BOTH books). Now in this book, “Two Can Keep a Secret”, the only reason I didn’t guess who the killer was is because the protagonist was either too busy wasting her time socializing, pretending to be so smart with her murder theories or misleading readers because WE can’t investigate (in BOTH books). Not only that her murder theories are unbelievable (in BOTH books). Why? Because why would the killer in “One of Us is Lying” do that? I don’t see any reason that’s at least believable. As for “Two Can Keep a Secret”, why would the victims have “business” with the guy. They had perfectly fine lives. AGAIN, explainable.

Secondly, the characters; I didn’t care about most of them because they didn’t really have a depth and I couldn’t connect to them. The reason I could not find out who the murder was is because the main character, Ellery, was looking at all the wrong people and I couldn’t walk into the book and investigate (obviously) so had to follow her.

Finally, the writing threw me off. I just found it a bit weird, I wasn’t used to her style. I definitely DON’T recommend this book.

I liked this book! I would never have guessed the culprit! Nice easy read. Well written.

ftudoric thinks this title is suitable for 13 years and over

staycity thinks this title is suitable for 80 years and under

blue_dog_35293 thinks this title is suitable for 14 years and over

olive_whale_22 thinks this title is suitable for 13 years and over

Twins Ellery and Ezra are staying with their grandmother while their mother completes a stint in rehab. Their mother, Sadie, rarely talks about her family or her twin sister that was murdered several years ago. The murder happened the same night that Sadie was crowned homecoming queen. Ellery has been nominated for the homecoming court and anonymous threats are made against all the girls that were nominated. The threats reference the murder of Sadie’s sister from 23 years ago and it seems as if the killer is ready to strike again.

There's something deeply satisfying about confronting a monster and escaping unscathed. Real monsters aren't anything like that. They don't let go.